Twilight Rising--6 Books for only 99 cents!

Hello lovelies!
Needs some great reads to kick off summer? Check out Twilight Rising, an awesome collection of SIX young adult paranormal romance and urban fantasy novels for only 99 cents!
This bundle includes Five, so if you haven’t had the chance to grab the first book of my exciting fae romance series, now is a fantastic time. And if you’ve already read Five, (supper YAY), then this set is going to rock your socks with five other great titles. How awesome is that?
Grab Twilight Rising at any of these great retailers today! 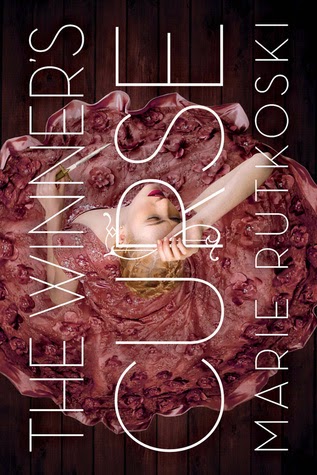 I fell for an Amazon add, and I'm glad I did. I went to open my Kindle and this beautiful cover caught my eye. I love the tie in to the story. There's something completely haunting about this cover, from the typography to the color scheme.I was taken by this story. I fell in love with the characters, the struggles, and the hope and loss on both sides. I'm not usually drawn to stories that have the potential to end in a tragic way. I like my stories to have a happily ever after, and I'm truly not sure what will happen in this trilogy. I'm usually pretty good about seeing where a story is going, but the middle of this one threw me for a loop I still haven't fallen from. It was so unexpected, and is what cinched my love of the characters and their struggles.This is a story about life and love and how fragile both are. It kept my attention from beginning to end. It made me want to yell at the characters and close my eyes for some scenes because I didn't want to see what happened next, but I had to. I'm looking forward to and dreading book 2. Yes, it's that good ;) If you want something to make you think, this might be your next great read.
Posted by Unknown at 8:31 PM No comments: 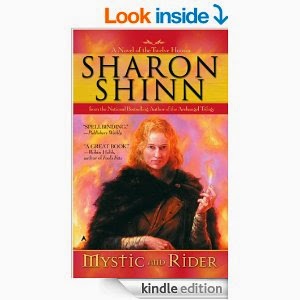 I learned about Sharon Shinn through Sarah J. Maas' recommended authors, and I have to say I am not disappointed. I loved Shinn's writing, her characterization and story telling in general. The sweeping landscape of Gillengaria was easily visualized, and I became enthralled in the lives of the characters. I didn't want their journey to end, and I'm glad to see it hasn't. If you're looking for an enthralling fantasy, give this one a go. It was an easy read, as I didn't want to put it down.

The Assassin's Blade by Sarah J. Maas--So worth the read!

The Assassin's Blade by Sarah J. Maas
My rating: 5 of 5 stars

Sarah J. Maas is one of my all time favorites. I wasn't sure if I wanted to pick up this book, but I'm so glad I did. It gave me insight into so many things I questioned in the previous books and really has ingrained the characters of the series into my mind forever. I love Ms. Maas' writing and can't wait for more.

View all my reviews
Posted by Unknown at 4:45 PM No comments: 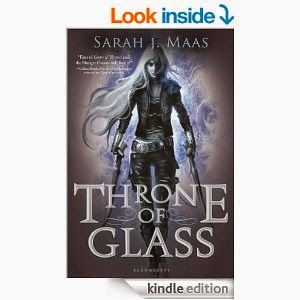 I've found a delightful author in Sarah J. Maas. (I know, where have I been?) This series is a best seller for a reason! I haven't been a fan of epic fantasy because it usually gets bogged down with details I don't enjoy. I like my books to be fast paced and chuck full of excitement, so when I had the chance to read Throne of Glass at a discounted price, I snapped it up. I had been looking for something exciting, and I wasn't disappointed. Ms. Mass is a master of words. I don't say this lightly. She weaves lines so exquisitely I can't help but be sucked into her prose.

The idea of a female assassin who was only eighteen and had endured so many hardships wasn't too appealing to me at first. I'd like to say I had real enthusiasm for this story going in, but I didn't. Celaena Sardothian swiftly stole my heart, and I was along for a glorious ride from that moment on. Celaena is likeable in most ways, yet flawed deeply. I like this about her character and was drawn to her imperfection and her sense of self. She'd been raised to be confident. She'd killed people for money, but what I saw in her was a young woman trying to make sense of a messed up world. I could relate, lol.

I won't go into details of the story. For that, you'll have to read the book. This is a no spoiler zone, so there :)

I've read the three available books in this trilogy and can't get enough. May 2015 won't come soon enough for this fan!
Posted by Unknown at 7:16 PM No comments:

It’s 2014 and we’re celebrating with an awesome fantasy themed calendar. This calendar is for the background on your computer and you can get this month’s image below.
Each month will feature a different book or series, so if you want to challenge yourself, try reading each book or series that is featured before each month is over. The series for November is the Evolutionary War series by Thomas Winship. He will be giving away a set of Vaempires eBooks. Be sure to enter the Rafflecopter below! 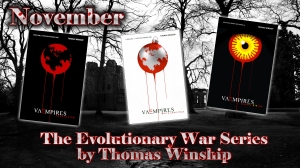 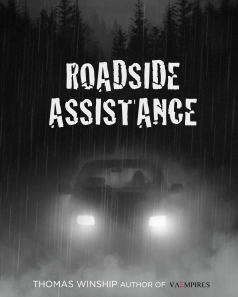 Roadside Assistance (Short Story)
For Hannah, a long trip home seems a small price to pay for a little peace … until her journey takes a turn for the worse. Now, injured and alone, she must test the limits of her courage, endurance, and love.
Amazon
Vaempires: Revolution (The Evolutionary War-Book 1) 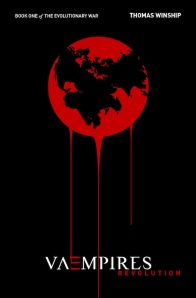 It is the morning of Princess Cassandra’s sixteenth birthday. Everyone’s attention is focused on the heir to the vampire throne. World leaders, the rich and famous, and VIPs from every corner of the globe have gathered in the nation’s capital to celebrate the momentous event.
Cassandra’s boyfriend, Daniel, is late for the party. He’s still outside the city when all hell breaks loose. What he believes is an act of terrorism proves to be a full-fledged revolution. Væmpires–former vampires who mutated into warm-blooded creatures with an insatiable hunger for cold blood–have launched coordinated attacks across the globe, with three goals: the eradication of humanity, the enslavement of vampires, and the ascension of væmpires as the dominant species on the planet.
The vampire and human leaders are killed. Cassandra is missing. Daniel is the acting king. Desperate to find the princess, Daniel and his friends fight their way across the besieged city. With the hopes of the free world resting on the shoulders of four vampire teenagers, væmpires unleash their secret weapons: a new breed of væmpire that is far deadlier than any ever seen before.
What can four teens do against an enemy that can shape-shift, fly, and walk through walls?
Amazon | Other Formats
Vaempires: White Christmas (The Evolutionary War-Book 0) 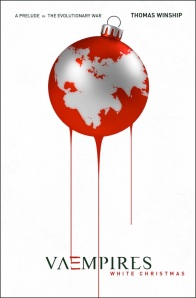 It’s almost Christmas. With the global holiday days away, the people of the world should be turning their attention toward celebrating peace and goodwill, but tension between humans, vampires, and væmpires is at an all-time high. Desperate for solutions, King Brant schedules a secret summit deep in North America’s Northern Forest. Along with Queen Anne, Princess Cassandra, Daniel’s family, and the human president and First Lady, the vampire leader seeks to reaffirm the ties between humans and vampires, while brainstorming ways to respond to the growing hostility among væmpires.
Meanwhile, Daniel and Cassie’s relationship is at an all-time low. The princess is still reeling from her breakup with Vielyn, and Daniel doesn’t know what he should or shouldn’t do to help. Little does he know that the summit will be flooded with surprises–guests, allegations, accusations, proposals, and even Christmas Eve revelations–but not all of the surprises will be pleasant.
Amazon | Other Formats
Vaempires: Zombie Rising (The Evolutionary War-Book 2) 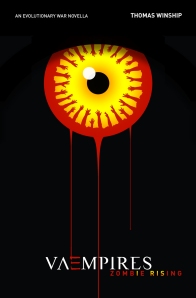 The tale of the Evolutionary War resumes in Væmpires: Zombie Rising.
Væmpires have taken control of twelve major cities. Their leader, Vielyn, seeks the atomic weapons that will bring the rest of the world to its knees.
Vampire forces are reeling. As Linq and Ray race to the royal estate to rendezvous with Cassandra and Daniel, the princess is captured and Daniel falls.
With the fate of world shifting to their teenage shoulders, Linq and Ray must deal with tremendous losses while battling a most unexpected—and undeadly—new foe.
Amazon | Other Formats
Vaempires (The Evolutionary War-Book 3)
Coming Soon!
2015
Author Bio:
Thomas Winship lives in New York. He currently serves as MBA Director for a private liberal arts college in southern New York, where he also teaches courses in English Composition, Communications, and Business. Prior to this, he spent fifteen years working for a global pharmaceutical company, specializing in organizational development, talent management, and training.
Tom writes in his spare time. His first novel, Temporary Insanity, was a 2008 finalist in a national contest but failed to garner industry attention. Væmpires: Revolution, his second novel (first in the Væmpires series) and Væmpires: White Christmas were published in 2011. His latest work, Væmpires: Zombie Rising, was published in late 2012.
He is an avid collector of books, comic books, music, and movies. His interests are diverse: on any given day, Tom is likely to be found watching a horror movie, attending a hard rock concert, or enjoying a Broadway show.
He is currently working on the next installment of the “Væmpires” series.
Website | Facebook | Twitter

Giveaway:
a Rafflecopter giveaway
Posted by Unknown at 5:30 PM No comments: 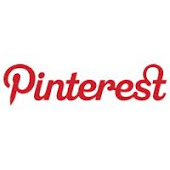 Friend Me On Goodreads 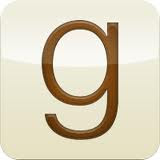 Let me autograph your ebook!